Award for PCSO as popular Pubwatch scheme launches in Northallerton 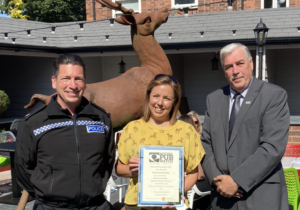 A Police Community Support Officer (PCSO) has been given a national award for her work on a scheme to keep pub staff and customers safe.

PCSO Helenor Gwatkin was presented with the National Pubwatch Star Award as the scheme was extended to Northallerton this week.

Over the past four years she has worked on the launch and development of similar schemes in Richmond, Leyburn and Catterick.

Pubwatch is open to all licensed premises, including shops, as well as pubs and bars.

It offers support to members in many different ways, including training, sharing resources and providing a network of information – all with the aim of keeping staff and customers safe. If someone is banned by one licensed premises, all local scheme members can also impose a ban.

PCSO Gwatkin is currently seconded to the Licensing Team, within North Yorkshire Police’s Partnership Hub, which works with other organisations in innovative ways to reduce crime and make communities safer.

Launch: Northallerton is the latest North Yorkshire town to benefit from the scheme

“This success is now being expanded on, with Pubwatch being extended to Northallerton.

“Keeping communities safe is all about prevention and early intervention. This scheme is an excellent example of that, so it’s great that more people and more businesses will now benefit from it.”

The Licensing Team actively manages a portfolio of more than 7,500 licensed premises across North Yorkshire and the City of York to ensure that premises work to four licensing objectives – prevention of crime and disorder; public safety; prevention of public nuisance; protection of children from harm.

During her time working on Pubwatch, PCSO Gwatkins’ achievements include encouraging many businesses to sign up, setting up training to door staff so they can keep people safe and spot signs of vulnerability and introducing practical support such as radio systems for members.

National Pubwatch’s regional representative, Peter Jackson, said PCSO Gwatkin’s award was well-deserved, as she has made a significant contribution to the scheme.

“I’m very impressed with her dedication to Pubwatch and the efforts she puts in to encourage premises to become members. The work she’s done so far has been a great success.”

Disclaimer: This article is for guidance purposes only. Kings View Chambers accepts no responsibility or liability whatsoever for any action taken, or not taken, in relation to this article. You should seek the appropriate legal advice having regard to your own particular circumstances.

This website uses cookies to improve your experience while you navigate through the website. Out of these, the cookies that are categorized as necessary are stored on your browser as they are essential for the working of basic functionalities of the website. We also use third-party cookies that help us analyze and understand how you use this website. These cookies will be stored in your browser only with your consent. You also have the option to opt-out of these cookies. But opting out of some of these cookies may affect your browsing experience.
Necessary Always Enabled
Necessary cookies are absolutely essential for the website to function properly. This category only includes cookies that ensures basic functionalities and security features of the website. These cookies do not store any personal information.
Non-necessary
Any cookies that may not be particularly necessary for the website to function and is used specifically to collect user personal data via analytics, ads, other embedded contents are termed as non-necessary cookies. It is mandatory to procure user consent prior to running these cookies on your website.
SAVE & ACCEPT